Ah the gen 2 starters! I loved them all! Meganium’s simply yet effective petal collar and green skin and feraligatr’s leering grin were all very effective. However, the one that I loved the most has to be typhlosion. It wasn’t anything about being a fire type or anything, it just looked really cool along with quilava. However, what kind of animal is typhlosion? Well, we’ll be discussing that today. Keep in mind though that we have yet another mixed bag ‘mon today so we’ll be sciencing it up a little more than usual.

Now when I mentioned that this evolutionary line is a mixed bag, I wasn’t kidding. not only does it jump between 3 orders, it’s classification alludes to a fourth. That’s A LOT compared to mightyena. which only bridged 2 different families in the same order. And look at all the controversy around that one…anyways, cyndaquil. Just looking at cyndaquil it’s kinda hard to tell what it is. Small, eyes, round body, a long snout, and flames that appear like spines on its back? Yeah I’m lost. Looking at its classification, it is the fire mouse pokemon. Ok then, so it much be a rodent of some kind (however, knowing how the dubbers classify, I would not be surprised if it wasn’t a rodent at all). I can’t think of any rodents off the top of my head that looks like this so we need to investigate more. Cyndaquil is a combo of “cinder” and “quill” meaning that it has to be a rodent with quills of fire then right? Well then, the only rodent that I know of that has quills are rodents in the the family Hystricidae or Erethizontidae: 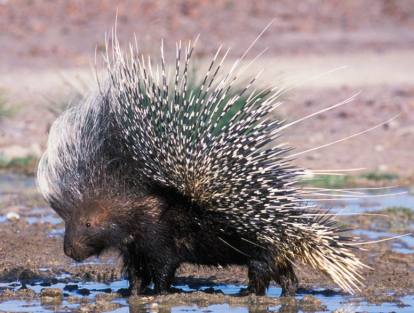 More commonly known as porcupines, these large rodents are notorious for their modified hairs that they use as a form of self-defense. Although appearing smooth, these quill are actually barbed and are very painful to pull out after they have been stuck in. Anyways, the round body and quill parts definitely fits the bill for cyndaquil (all the rhymes). Even looking at its Japanese name, Hinoarashi, it’s a combo of “Hi” meaning “fire” and supposedly “Yama-Arashi” meaning porcupine. However, something about this doesn’t sit right with me. First off, “Arashi” actually means “storm” when taken by itself and looking at the name, the “yama” (mountain by itself) is not present. Furthermore, firestorm in Japanese is “hi no arashi” , which is basically cyndaquil’s name. The last thing that doesn’t sit right is the snout. Porcupines have short rounded rodent noses, not long anteater-like schnozes. So is there another animal that looks like a porcupine but has a long snout? Well, there actually is. HOWEVER, it’s not a rodent. Heck, it’s not even a placental mammal. I’m of course talking about the short-beaked echidna (Tachyglossus aculeatus):

In addition to being incredibly adorable, echidnas are a mammal that represents the transition from the reptilian ancestry. Echidnas are one of the few remaining monotremes on the planet. Monotremes are mammals that exhibit all mammalian traits except for one: live birth. Instead, these animals lay external eggs very much like reptiles:

Unlike reptiles however where the young come out fully-formed, the young hatches in a fetal state where it must feed on the milk of the mother to grow. The only other mammals to give birth to fetal young are the marsupials, who are often considered the next step after the monotremes because they’ve done away with the egg laying. Eventually, mammals evolved to give birth to less helpless (although still very helpless when compared with a bird’s or a reptile’s) young and have abandoned the external egg totally. There are only five species of monotreme still in existence: four species of echidna and the platypus. They are very rare and confined to Australasia. Anyways, enough animal trivia. Is cyndaquil an echidna? Well…maybe. Looking at them both, the quill aspect fits and the snout fits as well. However, cyndaquil is small and light yet echidnas are large bulky animals. Also, echidnas sport large digging claws while cyndaquil obviously has none of those. Furthermore if cyndaquil was supposed to be an echidna, why is it classified as a fire mouse? I mean, as I mentioned before, I know the dubbers are bad at classifying but a mouse and and echidna aren’t even in the same ballpark. At least shell fish and turtles have a language-based connection. Is there perhaps another animal that is more mouse-like that would warrant such a classification? Well in fact there is. Meet the Streaked Tenrec (Hemicentetes semispinosus):

Tenrecs are what you would call an insectivore. Insectivores are small mammals that are known for, you guessed it, feeding on insects and other creepy crawlies. There is actually a very interesting scientific story about insectivores. Insectivora used to actually be an order of classification such as Carnivora or Cetacea. Although it was originally a wastebasket taxon (a classification where zoologists put the animals that don’t really fit with anything else), it eventually became its own refined order as genetic research indicated a relatedness between the animals that were thrown here. These animals include hedgehogs, moles, shrews, solenodons, desmans, and tenrecs. These animals are known to be small, short-limbed, poor-sighted and insectivorous. Although they resemble rodents physically, their dentition indicates a more carnivorous evolution rather than an herbivorous one as indicate by the rodent’s enlarged incisors. This suggests that although similar, the two lines are actually not that closely related since they split apart relatively early in the evolutionary tree. As I was saying, all those animals that I mentioned belonged to order Insectivora and all was well. recently, however, new DNA evidence suggests that the tenrec and golden moles are actually not as closely related to the others as we once thought. Therefore, they were split into order Afrosoricida. Because the term and description of insectivore is no longer exclusive, the old order got an new name as well in Eulipotyphla. That is the story of how order Insectivora went from being a wastebasket taxon to a proper order and then back to nonexistence. Despite all that, however, the term insectivore is still used a lot to describe animals in either of these orders. Anyways, enough of my old man ramblings. Looking at the streaked tenrec, it’s almost a spitting image of cyndaquil. Not only is is petite and mouse-like with small eyes, it’s also covered in sharp quills as well as having a long snout for seeking out earthworms and grubs. Its fur is also black and a brilliant yellow as if it’s on fire. The streaked tenrec is almost definitely what cyndaquil is based off of. 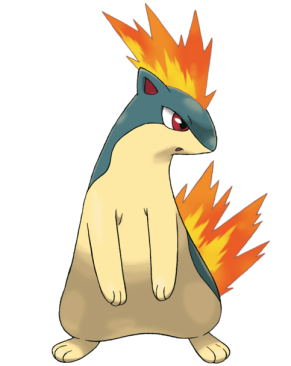 When cyndaquil evolves into quilava, it takes a complete 360 degree change. No longer does it even resemble a rodent and the only thing that’s even remotely tying it back to porcupines are the quills of flame. Very much like cyndaquil, its naming doesn’t help at all in terms of indicating what kind of animal it is nor does its classification. Apparently going off their rodent grind from cyndaquil, Bulba believes quilava to be based off of a Paca (genus Cuniculus): 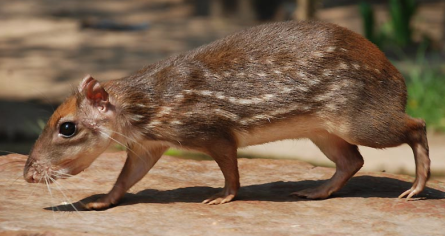 which is a genus of large South American tailless rodents. I’m not denying that quilava looks kind of like a paca, but I am a little confused why they would choose a paca when there are so many different (and more suitable) short-tailed South American rodents to choose from such as the acouchi (genus Myoprocta): 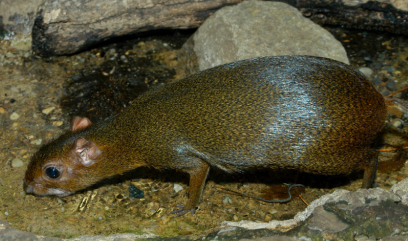 which possesses a much more slender build like quilava’s or maybe a red-rumped agouti (Dasyprocta leporina): 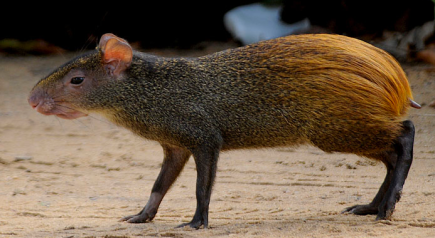 which even looks like its backside is on fire. All that aside though, I still don’t think quilava is a rodent. It just doesn’t look like a rodent to me. Considering that we’ve established that cyndaquil isn’t a rodent and I’m 100% sure that typhlosion is not a rodent, the rodent basis for the paca is more or less null and void. Furthermore, quilava’s body structure is low-slung and predator built very much like carnivorous mammals in the mustelid family. One animal that comes to mind is the short-tailed weasel (Mustela erminea):

Not only do the body structure and the color scheme match almost perfectly, it’s also an almost perfect transition to typhlosion. Granted that weasels don’t have quills and that quilava doesn’t have a tail, they had to to make the transition from cyndaquil to typhlosion somehow so taking some design liberties is understandable. I guess the biggest question to ask now is why Gamefreak chose to turn a tenrec into a weasel in the first place…

I love typhlosion. When I first saw typhlosion’s Sugimori art in second gen, I fell in love with it. It was easily my favorite second gen pokemon and that design is still my favorite version of typhlosion. I’m of course talking about his one:

There’s just something very powerful about this picture that I really really love. Anyways, what animal is typhlosion? As I mentioned before, cyndaquil takes complete 360 when it evolves. When cyndaquil evolves into quilava, it went from a n insectivore to a mustelid. Typhlosion is no longer a weasel but rather a badger. The term “badger” is somewhat a loose one. There is only a loose genetic relation and what characterizes a badger is the body structure. Badgers are all low-slung bulky mustelids with powerful limbs and claws for digging and burrowing. The also possess small ears, powerful necks and strong jaws. There are many different species ranging form the European badger of Eurasia tot he ferret-badgers of East and Southeast Asia. Looking at typhlosion, it’s the only one from the evolutionary line with claws and teeth and furthermore, its color scheme also somewhat matches that of a certain badger. I’m talking about the honey badger (Mellivora capensis):

The reputation of the honey badger precedes itself describing it as a fearlessly vicious creature that can stand up to even lions on the African savanna. Although the colors are swapped, the two are pretty much a dead match. The short powerful jaws, and long powerful neck and claws all match. Furthermore, honey badgers are named for their sweet tooth. They have short coarse fur that protects its skin from bee stings when it raids a nest. In typhlosion’s dex entry, it says that it also has short dense fur that it rubs together to generate sparks of fire. The ferocity connects these two beasts.

This entry was posted in Pokemon Corner and tagged pokemon. Bookmark the permalink.